Financial education: Europeans fall behind to the great discontent of banks 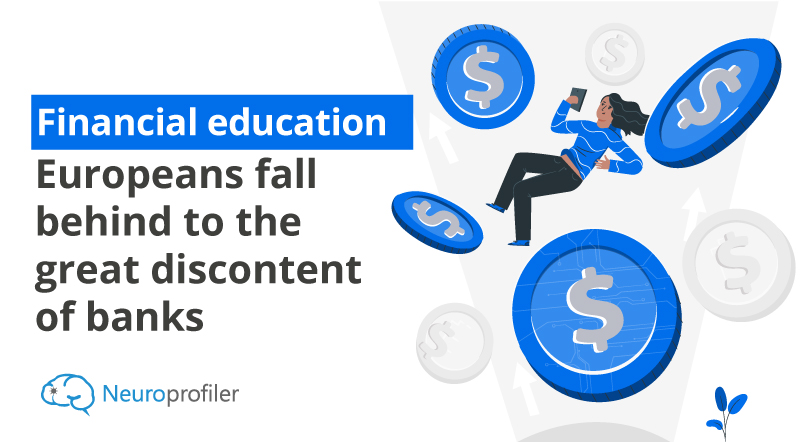 While 52% of French people say they are interested in current events and financial topics, only 20% consider themselves to have good financial knowledge, according to a study conducted by the Banque de France in 2020. The same paradox can be observed throughout Europe: despite a strong interest in finance, Europeans refrain from investing because they lack financial knowledge. They simply do not feel sufficiently equipped to make the right investment choices. The result? The few who do invest do so in safe havens: real estate and euro funds. If in times of economic growth, this conservatism was not a problem, in a much more uncertain context of low-interest rates, the profitability of banking institutions is at stake. In this respect, acting in favor of financial education is no longer “nice to have”, but has become an emergency.

The OECD defines financial education as “a combination of financial awareness, knowledge, skills, attitudes, and behaviors necessary to make the right financial decisions and ultimately achieve individual financial well-being valued by the individual. Although financial mechanisms are an integral part of our lives, few Europeans can describe the effects of inflation on their portfolio, let alone calculate interest rates. In this context, it is difficult to grasp more complex notions such as the relationship between risk and return, or risk diversification… Beyond the hindrance that this represents for investment, this lack of financial education has concrete impacts on the management of personal finances (personal debt) and the economy at large. A misguided entrepreneur will make worse decisions for his business than one who has a solid financial culture… And uninspired management decisions can weigh heavily on small structures.

… and an old problem

This lack of financial literacy is not new. As early as 2005, the OECD took up the subject, recommending, among other things: “Financial education must start at school. The population must be trained in financial matters as early as possible in life”. In 2007, it was the turn of the European Commission to speak out on the subject: “Consumers should be educated in economic and financial matters as early as possible from school age. National authorities should consider making financial education a compulsory part of the school curriculum.” 15 years later, little has changed. By creating teaching materials for voluntary schools to deliver financial education in the classroom, and by establishing an official national financial education day, Spain is among the good performers. Italy has also developed programs for its students, from primary to secondary school. Other countries, such as France, Germany, Austria, and Poland, have launched initiatives aimed at the general public, but their impact is more uncertain.

Despite the relative awareness of the problem among governments, it may be some time before the measures are taken to promote financial education take effect. What can be done in the meantime?

Financial education: what role for the banks?

Unless very ambitious programs are deployed quickly, the financial literacy of Europeans will not improve overnight. However, the issue of low-interest rates requires rapid action to return to profitability. It is urgent to act.

Traditionally, financial education has relied on the knowledge and trust of advisors. However, with the advent of neo-banks and robo-advisors, younger generations are turning less and less to their bank advisors. In this context, it is necessary to reinvent oneself by relying on digital. Best practices include:

We observe that the most interesting initiatives are mainly aimed at teenagers and young adults. This is good because parents will use it to ease their conscience, but it must be possible to reach all investors. If a client does not understand a financial product, European regulations prohibit the sale of this product (MiFID). Given the proportion of Europeans who declare that they have little financial knowledge, there is a huge potential here that it would be a shame not to exploit!

EDUprofiler: an innovative tool to act quickly on the financial education of your clients

If Europeans do not invest in anything other than euro funds, it is because they know nothing about them. To address this problem, Neuroprofiler has developed EDUprofiler: a fun e-learning tool to help your clients better understand financial products. Based on gamification and behavioral finance, EDUprofiler takes the form of a fun and engaging investment game. This innovative tool allows you to increase the sale of your complex products by helping investors understand the underlying financial mechanisms. The application then recommends the most suitable products according to the risk profile. In this way, it is possible to be in full compliance with MiFIDII regulations, as you can be sure that your clients have understood the investment issues.

With EDUprofiler, you can educate the new generation of clients to prepare for the future. By allowing them to discover the world of investment in a fun way, you ensure their loyalty in the long term. A quick and simple solution to address the lack of financial knowledge of your clients. Ask for a demo!