Gamification in the banking and financial sector: what are the business opportunities? 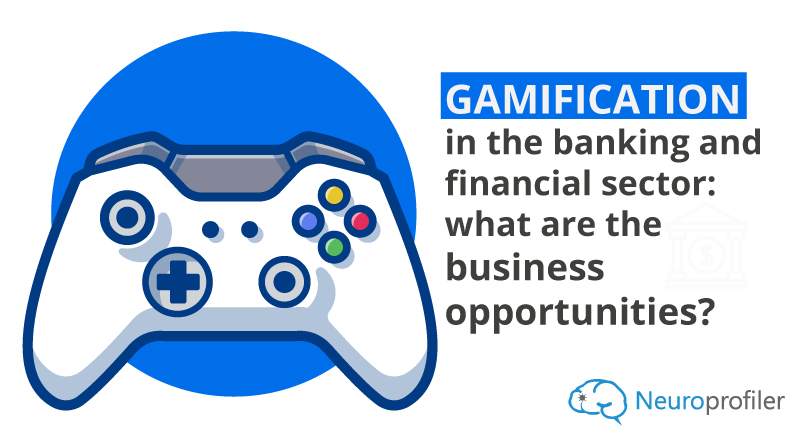 Fintech, online banks, neo-banks… In an increasingly competitive context, traditional financial institutions are on the lookout for innovations that will allow them to stand out. In this respect, gamification is an interesting area to explore. Granted that it is used to create business opportunities and not just hype. Here are some explanations.

Gamification: what is it?

Gamification is a marketing technique that consists of using the mechanics and dynamics of games in completely different areas. By making the action more playful, gamification increases participant engagement. Attribution of scores and rewards according to the levels reached, use of quizzes, progress bars… By using elements of game design, especially video games, gamification immerses the user in an entertaining and stimulating universe, making him captive. But it would be trivial to believe that the concept is limited to the attribution of points and badges. Gamification calls upon fields as varied as sociology, psychology, and cognitive sciences so that the user reaches what is called “the state of flow”. In this optimal psychological state, the individual is fully immersed in his activity. The tasks that are proposed to him are difficult enough to maintain his attention but easy enough to provoke in him a feeling of accomplishment and success. During this flow period, time seems to disappear… And the user interacts fully with the brand.

Do you find these concepts far removed from the challenges of banking and finance? Think again. Several financial institutions have already taken the plunge, offering their customers innovative concepts based on gamification.

Gamification: how to use it as a financial institution?

In the banking sector, gamification can take many forms. For example, the customer area can look like a dashboard similar to a game… To encourage users to save, one can imagine that as soon as the customer reaches a certain level of savings, he/she unlocks a discount or a voucher. Here are some examples of successful gamification in banking and finance.

Gamification can be used to encourage a bank’s customers to change their habits, for example, by encouraging the use of online services. For example, the Spanish bank BBVA designed a loyalty program based on awarding points when using its banking app, allowing customers to win cultural products and tickets for soccer matches. This innovative approach had earned BBVA the Bank Innovation Award in 2017. More recently in France, the fintech Juicy launched a marketplace featuring a multitude of investment projects, aimed at individuals. To stimulate transactions, Juicy proposes to reward users as soon as they invest, through a points system that can then be converted into cash.

Make banks fun
To keep customers waiting when they try to contact an advisor, they can be offered a mini-game that is in complete contrast to the seriousness of the banking world. For example, ING Direct launched “Avoid the Neighbor”, a mini-game that consisted in eliminating unwanted neighbors, while the New Zealand postal bank KiwiBank proposed throwing pies at Australian bankers!

At first glance, games are entertaining, but they can also be educational. The American financial group Wells Fargo was one of the first to seize this opportunity, proposing “Stage Coach Island”, a game aimed at teaching young people to manage their money well, in an interactive way. Capital One followed suit with “Junior Achievement Financial Park”, followed by Visa with “Financial Football”. In the same vein, let’s mention the very good “Flappy Saver” from Ikano Bank, launched in 2014 and directly inspired by the famous mobile game “Flappy Bird”. Less than a month after its launch, the app had more than 1.5 million games played and the most frugal player had won 100,000 Swedish kronor.

However, most of these games no longer exist today, as banks are not yet familiar with the renewal rates which are specific to games. Often punctual and ephemeral, these gamification operations have the merit of arousing the interest of individuals and have the potential to go viral. But gamification allows us to go far beyond a simple buzz hit… it allows us to meet the restrictive requirements of the regulator while boosting sales! For example, since 2017, the AMF has been offering FinQuiz, a financial education mobile application for the general public.

Neuroprofiler: an investment game to boost the sale of your financial products and meet the requirements of financial regulators…

Based on the principles of gamification and behavioral finance, the start-up Neuroprofiler has developed a series of fun applications to better understand clients’ investment preferences and educate them about the mechanics of financial products.

In addition to meeting MiFIDII, DDA, and LSFin requirements, this fun approach helps to boost sales of products that are both more complex and more profitable for financial institutions. It is an immutable principle of marketing: a fine understanding of the expectations of its customers is essential to selling better and more.

The first application proposed by Neuroprofiler is an ESGprofiler, which allows your clients to discover their investment profile and values, through a playful investment game. In addition to meeting the MiFIDII and DDA regulatory obligation to take into account investors’ preferences in terms of sustainable finance, the ESGprofiler allows you to offer your clients financial products in line with their values, to boost their savings.

The second application offered by Neuroprofiler is a RISKprofiler, which allows your clients to discover their risk profile via another investment game. Similarly, the RISKprofiler meets the MiFIDII and DDA regulatory requirements, and even the ESMA best practices published in 2018 while allowing for a better assessment of more risk-averse profiles that are not captured by traditional questionnaires.

EDUprofiler: a fun e-learning tool to help your clients better understand the financial products in which they invest

Did you know that 80% of individuals feel that they lack the financial education to invest with confidence? And that this lack of knowledge pushes them to invest in products with low returns, in 50% of cases? To address this other issue, Neuroprofiler has designed EDUProfiler. Also based on gamification, EDUProfiler allows you to educate your clients about financial products in a fun and engaging way. This e-learning platform allows you to democratize the world of investment among savers and to position your financial institution as an innovative player.

In addition, like the ESGprofiler and the RISKprofiler, the EDUprofiler meets the regulatory requirement to offer clients only products that they understand. Given the low level of financial literacy among individuals, this requirement often prevents financial institutions from offering their clients products that are in line with their risk preferences or investment values. For example, a client with a strong interest in specific themes such as biodiversity or the preservation of natural resources will not be able to invest in line with his values if he does not have a minimum understanding of the concept of shares.

Are you ready to take advantage of the opportunities offered by gamification? Discover all the advantages by requesting a demonstration of the Neuroprofiler modules now!